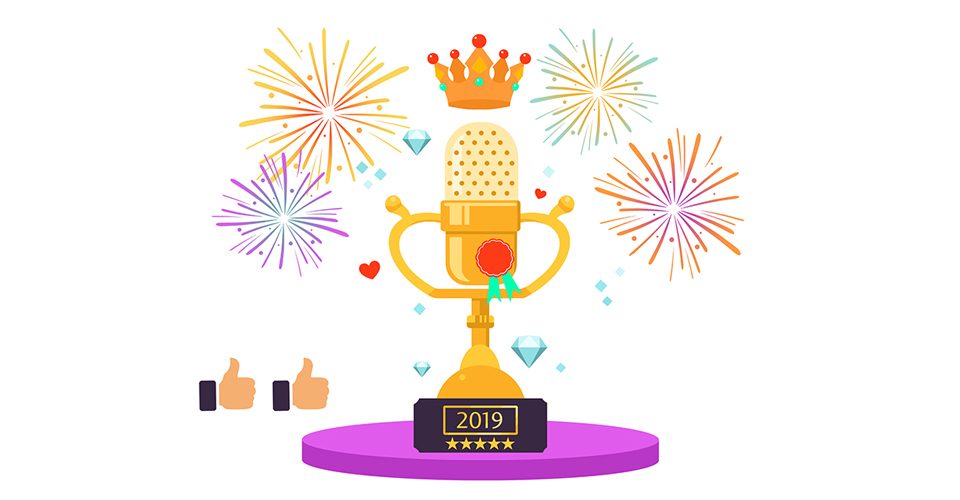 As the year draws to a close, it seems only right to reflect on some of the great listens this year brought us. We’ve scoured all our sources, poured over the charts and scrolled through our libraries to find the best podcasts 2019 had to offer.

Through careful consideration, we’ve narrowed down the options to our top ten podcasts fresh off the production line this year. The list is in no particular order as there were just so many great new shows that launched this year that ranking one above another would have been an impossible task!

This year, Will Ferrel revived his Anchorman character, Ron Burgundy for a new podcast. If you can imagine a fictional character interviewing real people in the real world, but through the lens of an imaginary life, then you’ve visualized The Ron Burgundy Podcast. Ron Burgundy – anchorman turned reluctant podcast host – and his co-host Carolina Barlow spent the year interviewing celebrities, politicians…and people who got stuck with them in an elevator. It’s a mind-boggling blend of interviewing real people and addressing real issues against a fictional backdrop. The humor is very dry, which may not be everyone’s cup of tea, but if you’re a fan of that genre of comedy, then this podcast is for you.

In true Ron Burgundy style, he’s oblivious, egotistical and often vain and obnoxious, but this yields hilarious one-liners and throw-ins from all involved. Will Ferrel is completely committed to his role, and you’ll keep having to remind yourself that Ron is just a character – which is thankfully the case, as some of the stuff he says is outrageous! So while you have to enjoy the flavor of Ron Burgundy to really appreciate this podcast, the show itself is a really fascinating concept, and really brought much laughter this year.

2. Over My Dead Body

Brought to us by the producers of the hugely popular Dirty John and Dr. Death, 2019’s offering, Over My Dead Body, was bound to be a hit, releasing two seasons this year. Season 1 tells the story of once husband and wife, Dan and Wendi Markel, two high-powered lawyers who were madly in love…until they weren’t, and one of them was dead. We follow the story – a true-crime saga at its finest – and unravel the mystery and twisted motives behind the murder.

Season 2, entitled “Joe Exotic,” is a unique spin on the genre, involving a blond mullet and rescued exotic animals. It’s the story of two people – Joe Exotic and animal activist, Carole Baskin – at war with one another, while both dealing with personal grief and sharing a love of exotic creatures. The story follows their feud, which escalates dramatically with shocking consequences, making this a binge-worthy podcast of note for this 2019.

A journey to the moon set to a score by Hans Zimmer? No, it’s not the latest blockbuster, but a podcast detailing the fascinating story of the quest to achieve the first moonwalk. It’s an in-depth look at what it took to get there, right from the planning stages to that historic giant leap for mankind. It’s riveting, informative, and captivating.

The history and the facts of this incredible feat have been woven together perfectly. It’s simultaneously factual and emotive, which seems impossible, and yet perfect in light of the story they’re telling. It’s easy to see why this podcast was loved by so many this year. And did I mention Hans Zimmer? I’m fairly confident that you could read the phonebook to one of his compositions and your podcast would be a hit!

The Office co-stars and best friends, Jenna Fischer and Angela Kinsey joined the ranks of celebrity podcasters this year, bringing us Office Ladies. In each episode of the podcast, Jenna and Angela share fast facts and hilarious behind-the-scenes tidbits from each episode of the hit television series, starting right at the beginning with the pilot. This podcast is delightful and heartwarming.

You can tell Jenna and Angela really are best friends and that they, together with the rest of the cast, had the best time making this show. Each episode is a treasure trove of insider information from the two ladies, as well as from other members of the cast when they drop in for a catch-up. Whether you loved The Office, or want to watch it for the first time, this podcast is a real gem.

Another fascinating listen of 2019 was The Dropout, which tells the flabbergasting story of Elizabeth Holmes and the Theranos Scandal. The Dropout differs from the others in the true-crime genre due to its focus on straight-forward reporting – rather than relying on interwoven narrative from the host. But don’t think its without flare and flavor! The narrative has no need for any story-telling flourishes as its so full detail and interest all on its own.

Each episode features a different employee of Theranos, a medical company headed by Holmes, with grand ambitions of changing the world. There was just one teeny-tiny problem…the technology they claimed to have and built the company on for 15 years, didn’t work. Yep! The Dropout is the unraveling of a scandal, but it’s also a truly eye-opening exploration of Silicon Valley, the strong motivation of believing in something, and the sheer extent a person will go to in order to perpetuate a lie. It’s an example of investigative journalism at it’s finest, as well as giving you plenty to mull over in respect of the human condition, and all the elements that made it possible for a scam of this magnitude to continue for so long.

6. The Shrink Next Door

How much do we really know about our neighbors? The Shrink Next Door explores this question and more in this riveting podcast that could easily be mistaken for fiction. Journalist Joe Nocera uncovers the strange relationship between his neighbor, therapist Ike Herschkopf, and Marty Markowitz, who is first assumed to be Ike’s gardener but is soon revealed as one of his patients. What follows is the unraveling of a twisted tale of manipulation, control, and mental abuse.

From the discovery that the house Ike lavishly lived in like his own – complete with a wall full of pictures of Ike and his celebrity patients – was in fact, Marty’s, to the unveiling of the true extent of his breach of the doctor-patient relationship, the story is wild, unbelievable, and true. Throughout the podcast, you hear from Marty himself, as well as a number of Ike’s other patients, all of whom were betrayed by someone they had turned to for help. It definitely earned its stripes as one of the most riveting-yet-unbelievable podcasts that came out this year.

I realize its 2019, but I’ll be honest and say I really had no idea how cryptocurrency worked. At least until I listened to The Missing Cryptoqueen. The podcast details the meteoric rise of Dr. Ruja Ignatova and the pseudo-cryptocurrency, OneCoin. They took the world by storm, hosting huge events all over the globe, and promoting her new cryptocurrency that was dubbed “The Bitcoin Killer.” With her intelligence and charm, decked out in silk gowns, diamonds, and red lipstick, Dr. Ruja convinced thousands of people from all over the world to invest massive amounts of money into OneCoin, with the promise of making them millionaires, if not billionaires! And then Dr. Ruja disappeared… never to be seen again!

The podcast covers the journey of Jamie Bartlett and Georgia Cat as they try to unravel the hype behind OneCoin, by speaking to people who worked for Dr. Ruja, private investigators, as well as the people who parted with their money in order to buy OneCoin. It was fascinating hearing how she conned so many people, but also heartbreaking realizing how much some people have lost. The podcast gives great insight into one of the biggest cons most people have never heard about and was one of the most informative yet entertaining podcasts of the year.

Cautionary Tales is described as fairy tales for adults. And as much as we use fairytales to caution children against certain behaviors, Cautionary Tales are the very true tales adults need to hear to harken introspection and bring about positive results by learning from others. It brings to life the consequences of human error, the results of hilarious mishaps, and the lessons to be learned from tragedy.

A stellar cast brings these tales to life and the show as a whole is a great example of a blend between entertainment and information. It really drives home the point that we are never too old to learn from the past mistakes of others and to use these to improve our future. And all things considered, we’re grateful it graced us with its presence this year!

9. David Tennant Does a Podcast With…

David Tennant Does a Podcast With...is another gem 2019 bestowed upon us He’s an incredible actor, a favorite Doctor (Who, that is) and can play anything from a brooding detective on Broadchurch to a terrifying psychopathic villain on Jessica Jones, to the voice of Scrooge McDuck on the Ducktales reboot ‒ there’s really nothing he can’t do. But possibly the best use of his talents is as himself as a podcast host. He’s affable, funny and an excellent conversationalist. Season One saw him sharing the mic with the Ian McKellan, former prime minister, Gordon Brown, the delightful Jennifer Garner and fellow Whovian alum, Jodie Whittaker, to name but a few.

Each episode feels like a conversation between friends, jumping between work experiences and personal stories with ease, giving you the impression that each guest feels comfortable sharing with him. The conversation is warm and flows easily, which can probably be attributed to the fact that these always take place face-to-face. He really allows his guests the space to speak, never dominating the conversation, but always facilitating it with ease. Here’s hoping for Season 2 in 2020.

Arguably one of the biggest scandals of 2019 was the College Admissions Scandal, which saw the likes of celebrities Felicity Huffman and Lori Loughlin, and her husband, Mossimo Giannulli thrust into the limelight for all the wrong reasons. The story shocked and intrigued us in equal amounts, with people the world-over eagerly awaiting the next development in the saga. Gangster Capitalism gives us all the behind-the-scenes info we were after, from those on the inside of what we now know as Operation Varsity Blues. The podcast features in-depth interviews from those on the ground – reporters, college admissions experts, even college students who’ve admitted to cheating on their SATs! There are reenactments of interviews and tapped-telephone conversations and shocking revelations of the many layers involved to keep a scheme of this magnitude going, and with the case far from over, we expect more podcasts such as this in the new year.

From true crime and scandals to star-studded interviews and TV darlings, our ears couldn’t have been happier with all the incredible podcasts gifted to us by 2019. So if you haven’t quite made it through all the podcasts on the list yet, there’s still a few days left in the year to check them off. If this year is anything to go by, 2020 is going to be jam-packed with its own top-notch podcasts to keep us thoroughly entertained for our next loop around the sun.

Jennay is the Content Director at We Edit Podcasts